End the year on a movie-ful note!

Here is our list of awesome movies coming your way before the year ends! There’s something for everyone – little ones included. Enjoy!

Imtiaz Ali is back with another love story, based in Corsica. This unusual fairy tale unfolds the lives of a nomad and a tourist who gradually develop fondness for each other as they orchestrate tamashas all across the island.

Kray Twins, known for the murders of  “The Mad Axeman”, George Cornell and Jack “The Hat” McVitie are back on the scene!  Legend is a classic crime thriller taking us into the secret history of the 1960s and the extraordinary events that secured the infamy of the Kray Twins.

Watch it for: Rocky aka Sylvester Stallone. Michael Jordan.
Rocky returns to train and mentor Adonis Creed, the son of his late friend and former rival Apollo Creed.

Watch it for: Sequel to the Return of Jedi!

The Force Awakens is the seventh installment in the glorious Star Wars saga. Years after the events of Episode VI, the learner is set to become the master, teaching others the ways of the force. But something dark lurks in the near future. Is this the return of the dark side?

Saving the best ones for the young ones!

Watch it for:  Journey of a passionate boy and his challenge to compete in a paper plane championship.

If at first you don’t succeed. Fly, Fly again!
Paper Planes is an imaginative children's film about a young Australian boy's passion for flight and his challenge to compete in the World Paper Plane Championships in Japan.

Watch it for: From the creators of Inside Out!

A humorous and exciting original story about Arlo, a lively Apatosaurus with a big heart. After a traumatic event unsettles Arlo's family, he sets out on a remarkable journey, gaining an unlikely companion along the way - a human boy.

Watch it for: From the imagination of Charles M. Schulz and Blue Sky Studios- creators of ICE AGE films.

Follow the adventures of the all-time favorite comic book characters, Snoopy and Charlie Brown in 3D.

"A strong woman looks a challenge in the eye, and gives it a wink" Every International Women's Day is a reminder to acknowledge the powerhouse of the society and their constant contribution towards its betterment. We have a lot of women around us who have not only contributed to the society with the work that they have done but are also able leaders of promising organizations.  On the 110th Anniversary of International Women’s Day, Advantage Club celebrates the strong and inspiring women who have "chosen to challenge" in the corporate HR industry. These phenomenal women chose to break the stereotypes and make an impact in the employee engagement in their organization. We have had the privilege to interview some of the very ambitious and dynamic wonder-women who have succeeded in making a mark. Click on their picture to read about them here:

A working woman is no short of a superhero. She is the true epitome of balancing work and life, and it's amazing how seamlessly she manages both. And just like a superhero, she does it without any ulterior motives and superficial intentions. In our society, there are a lot of women who have not just made an impact in the world with the work they have done, but are also leading various organizations. Today an individual spends half of their life in their workplace, and hence it is imperative that they stay engaged, connected and upbeat. And this is achieved through strong levels of employee engagement. No easy task! On the 108th Anniversary of International Women’s Day, let’s talk with some superwomen in the employee engagement space, who through their constant efforts keep the employees in their organization happy and productive. And if you work with them, today would be a good day to walk up to them and say a thank you!   Antara Mukherjee  Senior Manage 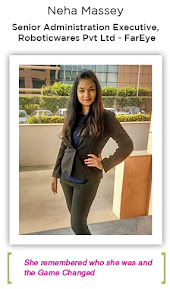 Neha Massey Senior Administration Executive, Roboticwares Pvt Ltd - FarEye Tell us about one of your superwoman moments:  One day when I  was  travelling  in a DTDC bus to work, I saw an elderly man sitting on the ladies reserved seat and was trying to touch the female passengers in the wrong places, it boiled my blood and I questioned him that what are you trying to do by yelling at him, and by seeing me standing up against the wrong other female passengers also got the courage and started admitting that he does that with them also but seeing as the old man we were not saying anything but that does not mean we will keep up with the  misbehave . Then he got off from the bus  at  the next stop. - Standing up against the wrong doing was my moment of pride. You ensure work-life balance by:  organizing my time - time management. In that way, I get to complete my tasks on time and also get time for Family and Friends. You spend your weekends doing:  Helping mom in h